Discover how Fractured Online brings the MMO and MOBA worlds closer by offering both meaningful choices and unparalleled flexibility! 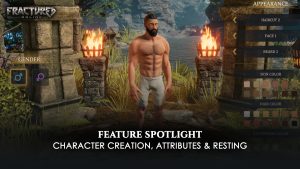 In the last Feature Spotlight, we’ve given you an overlook on the types of abilities available in Fractured Online and the Schools of Magic & Fighting that group them – giving you a good idea of what attribute(s) influence the power of each school.

Today, we’re going to discuss each attribute in detail and how your choice of race and family influences your attribute assignment decisions during character creation.

Last but not least, we will cover the missing bit of the Knowledge System – the Resting phase, through which the concept of “every day a new gameplay” comes to life.

The choices you make in this phase are impactful, since they have a strong effect on how well your character will do when dealing with different ability schools and combat scenarios. They’re also persistent, in that you won’t be able change your character’s race and attribute distribution in game – unlike what you can do with talents and abilities.

The choice of race is the most impactful you’re going to make in your Fractured Online experience. As already described in other spotlights, it determines on which planet you start your journey and the ruleset you’ll be subject to.

Other than that, different races – and families – come with a set of advantages and disadvantages such as unique abilities and backgrounds, basic statistic modifiers and attribute variations – the latter of which are covered in the next paragraph.

Once you’ve selected your race, it’s time you decide how to set your main character attributes: Strength, Dexterity, Constitution, Intelligence, Perception, and Charisma.

For starters, you’re given a pool of Creation Points that can be distributed among the six attributes – 80 if your new hero is a Wildfolk or a Demon, 100 if Human. Creation Points can be spent to increase your attributes from their minimum value of six (6) up to their cap, which normally is 18 but can change according to the character’s race and family (as shown in the table below, which lists cap variations by race). If the value of an attribute is below 10, you’ll suffer maluses to all the statistics related to it – that’s why it’s convenient to raise each up to 10, particularly for inexperienced players.

To exemplify, let’s say you’ve selected a Wildfolk character of the Nheedra family – a strong breed, but quite slow in reflexes and not the most apt to charm others (it’s a bear, after all…). You’re then able to raise your Strength and Constitution up to 20, but your Dexterity and Charisma only up to 16.

There is an important catch here though: the relation between Creation Points and attributes is not 1:1! On the contrary, the higher you want to increase an attribute, the more Creation Points you must spend. Moreover, each race and family (besides Humans) has an affinity with a specific attribute (highlighted in blue in the table above), which makes that attribute easier to increase. 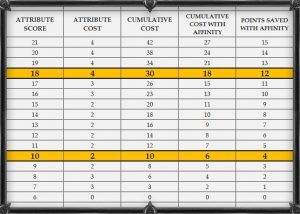 In this last step, you can choose the past of your character. Each kind of background grants you a different set of abilities already studied and sets you on a different path during the new character tutorial.

One thing worth noticing is that all character backgrounds available are pre-defined – you can’t choose the exact abilities you already know. This choice has been taken to make new heroes always start with a set of abilities that synergize properly with each other, allowing new players to have a more effective early game experience. Once your character learns new abilities and gains talent points, its background will no longer be significant anyway.

For more information on ability learning, talents and overall character growth, check out the last Feature Spotlight on the Knowledge System.

…and just to reiterate: while the chosen background gives you a set of abilities to get you started, these are not just available for a specific background, as all abilities can be learned by any character at one point. In other words, these presets are just to get you started a little quicker.

The following paragraphs cover the effect of each of the six attributes in brief.

For more information on what types of abilities they influence in detail, have a look at the Skills, the freedom of choice Feature Spotlight!

Strength is a measure of the raw physical power of your character, determining how hard it can hit with most medium/heavy melee weapons and how much weight it can carry. It also grants a significant bonus to maximum health and increases the effect of most Warfare abilities, plus some Martial Arts abilities.

Strength is the main attribute for heavy melee hitters that want to deal the highest damage in the game, being able to wield massive 2-handed weapons effectively.

A character heavily focused on Strength wants to end a fight as quickly as possible with a small amount of devastating hits, stunning and knocking down its opponents, especially as it often lacks the physical and mental resources to sustain lengthy battles.

Dexterity is a measure of the speed, nimbleness, stealth, and sleight of hands of your character, determining its evasion ratings, its attack speed, the stealthiness of its actions and its proficiency with lockpicks.

Dexterity is the main attribute of nimble fighters and furtive characters that wear light equipment to prevent armor from interfering with their combat abilities and hold small, fast melee weapons. The schools of Assassination and Martials Arts benefit the most from Dexterity, but some Hunting abilities do as well.

Reacting quickly to any situation is the key to the success of a Dexterity-based character – and it has all it needs to do so effectively.

Intelligence is a measure of the magical power of a character, determining the intensity and cooldown of its magical spells and natural resistance to magic. It also determines the maximum value of mana and its regeneration rate.

Magic tricks and incantations represent the full extent of the offensive and defensive power of a sorcerer, which makes Intelligence paramount. Moreover, a reliable pool of mana can make the difference between success and defeat, especially since powerful wizards usually achieve their powers sacrificing most of their physical strength.

Constitution is a measure of the physique and endurance of a character, determining its natural resistance to crowd control effects and giving a large boost to its Health. Constitution also increases the effectives of most consumables and allows a character to tire less quickly.

Given the impact of Constitution on the resilience of your character, it’s recommended you don’t lower it too much, unless you’re planning to be able to defend yourself otherwise through magical means.

Fighters willing to enhance their powers with alchemical concoctions also benefit significantly from a high Constitution score, which not only increases the effect and duration of most potions, but also grants the character a natural resistance to the negative side effects of the most powerful ones.

Perception is a measure of the accuracy and observation skills of a character, determining its chances to score critical hits, its accuracy rating and its ability to spot hidden creatures.

The schools of Hunting and Divination benefit the most from Perception, but some Assassination abilities do as well.

Some people need years of study and practice, others just get it naturally. Instinct, keen sight and acute intuition are essential for bounty hunters, rangers, and… assassins!

Charisma is a measure of the leadership and mental abilities of a character, determining the number of pets and companions it can control at once, its ability to charm other creatures and its affinity with mental abilities. Moreover, it determines the base luck of the character.

Some say luck is blind, but knowing yourself and having faith in your abilities often helps a lot! Charisma is used by leaders and kings to raise among people, by minstrels to convey emotions to the souls of their audience, by tricksters to deceive their victims with illusions, and by trainers to earn the respect of their pets.

When chances between life and death depend on the throw of a dice, Charisma makes the difference, skewing the balance towards the best result.

As already explained in the Knowledge System spotlight, your character can eventually learn all the abilities available in the game, but he’s only allowed to use a subset at the same time.

This limitation is where Fractured Online flirts the most with the MOBA genre, allowing you to shape a different “hero” before embarking in any kind of adventure to better tackle the scenario you’re going to face or find the right spots in your friends’ party.

In this chapter, we’ll be discussing how this feature is implemented in practice by outlining its two-core mechanics: resting and memorization.

The resting mechanic is quite straightforward. When you start a resting phase, your character sits on the ground, and you are presented with a menu through which you can re-assign your talent points and choose the spells and abilities you want to memorize for your next adventure.

Resting involves no forced waiting time – once you’ve made your decisions, just confirm them and your hero will be ready to go. Moreover, it will have recovered all of its health and mana, and be cleansed of all negative status effects besides long-term curses and diseases.

There’s no limit to the number of resting phases you can take in a day – but of course they would lose all their strategic importance if you could have one at any time! That is why you can rest only in a safe location where your character can sit in front of a fire – be it your home, a friend’s mansion, a public tavern, or even campfire, although the latter doesn’t allow you to concentrate enough to memorize new abilities and talents.

As we explained above, the number of abilities you can memorize during a resting phase is not fixed. This means their number can be greater than what fits the ability hotbar at the bottom of your screen! How are you able to use them all in combat then?

Well, you can’t – not at the same time at least, since spells in your hotbar are the only ones you can actually cast. At any time when out of combat, however, you can take an ability out of the hotbar and replace it with a memorized one of your choice. This operation is not restricted as resting phases are – it’s enough you aren’t in the middle of the action really!