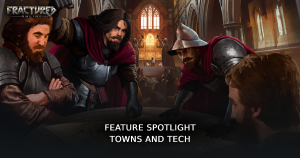 Because we know many of you can’t wait to learn about all the other interesting things, we have prepared for you, here’s a summary of what to expect.

In Fractured Online, your world is not only what you make of it but also what you make it. Towns and housing play an especially important role in that aspect because they serve as your base of operation. As with all our features, we don’t want to exclude any part of our userbase from enjoying the game, and that’s why we’re giving everyone plenty of options on how to live their social life.

The town system we’ve built has something for everyone. Lone wolves can claim their own lot of land outside of a town. Here they can build a home and basic crafting stations. More social players can instead band together and start a settlement or join an existing one. Because settlement membership (also known as citizenship) isn’t directly related to guild membership, the possibilities of your own unique network are endless, allowing for completely adaptable gameplay and progression.

For the more ambitious among you, becoming a settlement’s governor is worth considering. Recruit at least 19 fellow players to join your group of settlers and claim the role of governor, complete with the authority to grant settlement membership, excommunicate members, decide where to place buildings and which technologies to invest in.

As you can see, towns have a lot to offer. Let’s take a closer look at them then, starting with where they can be created in the first place.

Just like how the best fiction is based on reality, the best MMO experience mimics real life, and our housing system does just that (though maybe not life in 2022!) What we mean is that where you place your town matters. You’ll first want to consider which gaming aspects you’d like to invest in, like blacksmithing or carpentry, and if those resources are nearby. After all, you won’t want to haul wood halfway across Syndesia just because you’ve joined a town on the outskirts of a copper mine.

To make it more interesting for everyone, we’ve created predefined town areas. 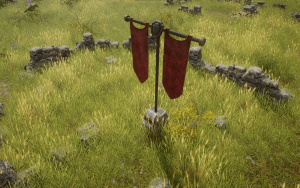 Those areas are locations where a village or city used to exist on Elysium in the days before the Fracture. They are yours to claim and develop a new settlement. If abandoned, you’ll find monsters roaming around as well as the ruins of buildings past.

In addition to player towns, each continent features a couple of NPC towns. These serve as starting locations and hotspots for new players. They feature basic facilities that cater to the basic needs of players and can’t be conquered.

So you’ve found the perfect place for your town. It’s got all the resources you want nearby. Now it’s time to start your settlement.

Wait! Not so fast… you’re going to have to find 19 fellow players, regardless of which guild they belong to, to join you. A town spot can only be claimed by a group of 20 players that have banded together. The maximum count of members in a settlement depends on the number of plots available in a Town. Larger guilds that exceed the maximum can split up into several settlements and help each other out.

While each character you create is free to join any guild, there can only be one settlement membership per account, meaning each of your characters will belong to the same settlement.

Being the governor of a town comes with perks and responsibilities. Not only will you be able to set the purchase price of residential lots of land, decide the tax rate applied to people and shops in town and manage the town’s money, but you’ll also be entitled to managing settlement membership as well as town layout, meaning you’ll decide who gets to join and remain a member of the settlement and which buildings go where and how much you’re willing to invest in each branch of the tech tree.

Just as Rome wasn’t built in a day, your town won’t be finished in one day either.

Settlements in Fractured Online are broken down into 15 ranks across three stages. 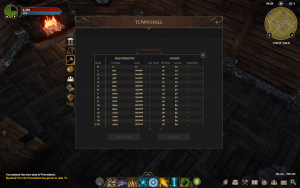 The first stage is called a Hamlet. All settlements start here. From there they progress to Village status, and then ultimately to Town status.

How do they progress? Through gold, prestige, and upkeep costs.

Prestige points are based on the number and types of buildings a town contains. Gold (in-game currency) is consumed only when ranking up a town, while upkeep also has to be paid on a regular basis, and consists of different types of edible resources (cereals, proteins, and vegetables)

As a town grows and climbs to ranks, it is rewarded with research points. Those points are for the governor to invest in the tech tree, ultimately allowing to unlock skills and crafting and enchanting possibilities. 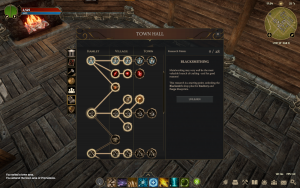 The current tech options include Tailoring, Masonry, Witchcraft, Carpentry, Blacksmithing, Trading, and Religion. As your settlement increases in rank, specific skills in each branch are unlocked according to settlement status.

As the number of ranks and therefore research points are limited, you’ll need to decide wisely which branches to invest in and which skills to unlock. Will your town become known for enchanting jewelry or for shaping steel and copper into the best weapons around? That’s up to you as governor. 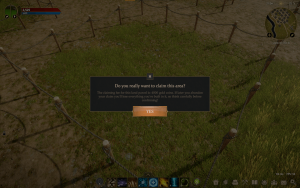 We also know the hustle and bustle of city life isn’t for everyone. That’s why we’ve also created housing options for those who prefer to settle outside the town walls.

Residential areas are also predefined. There you can claim your own personal land parcel in which to place your own building and develop it as you like, free from the control of any governor. 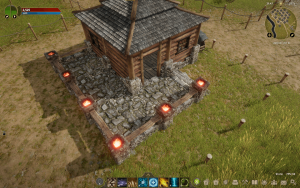 Just like towns, you’ll have to work to keep your lot maintained, but you won’t have as many possibilities like you would as a town citizen. Crafting possibilities and how far you can develop a personal land parcel are limited, but governors can decide to open up town crafting shops to everyone or to residents of the region controlled by the town. Therefore, you’ll want to think about how you’ll play Fractured Online in the long run and what sort of network you’ll want to build.

Since guild membership, settlement membership and housing location aren’t directly related, you can play Fractured Online how you want to. 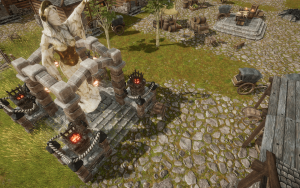 Now that you know how the housing system works, it’s time for you to decide how you’ll play. Will you form a group or join an existing one? Will you focus on growing your town into a self-sufficient community or turning it into a hub for trading and crafting? Will you hold a monopoly on coveted resources and amass unfathomable amounts of money and enemies? As that is certain to lead to one war or another, let’s focus on those in another spotlight in the future.

Whatever path you choose, it’s yours to follow and yours to deviate from.

Fractured Online is an open world. Open to possibilities. Open to you. We’re excited to welcome you!